Discovering the Identity of Lisbon through the Azulejos

Square, shiny ceramic tiles, colorfully painted, cover the city. They cover its walls, its tabletops, its staircase banisters. Its bathroom and powder room interiors, its churches inside and out.

They take their name from the Persian al zulayj, meaning “polished stone”. 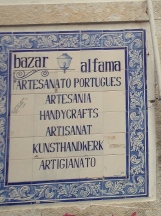 But they are much more than polished stones. They are little works of art, that put together build the image and the identity of Lisbon. They tell the story of the city, and manifest the artistic trends of the times, tirelessly, for the past 500 years.

A Bit of History…

The ceramic tiles were first brought to Portugal from the Moors, in the 16th Century, when they were used to sketch mostly biblical and mythological scenes. About a hundred years later, the Portuguese started to imitate the Persian carpets and built them out of tiles on their walls. The 18th Century brought the “Golden Age of the Azulejos” when these unique hand-made works of art were replaced by mass production. The notorious repetitive pattern tiles were born out of this azulejos era. 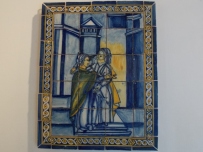 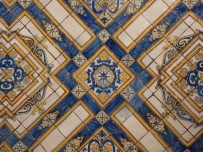 After Lisbon emerged from the Great Earthquake it survived in 1755, the azulejos became a practical, durable material to rebuild the destroyed city. The locals started putting small shrine-like painted tile designs above their home entrances, believing it would protect them from future disasters.

The City of Million-Color Tiles

Climbing the hilly roads of the Alfama neighborhood, I learned to see the painted tiles with new eyes. Strolling on the narrow pathways of Chiado I understood that they can be more than “ceramic wallpaper” for clean bathrooms. The ceramic white squares have been canvases for expressing hundreds of years of art. Storytelling mediums, that left a deep, colorful print on the history and culture of Lisbon. The poems they would silently recite could be as long as hundreds of tiles put together, or as short as a bunch evoking a domestic scene or a craft tradition.

The azulejos, are the great identity of Lisbon. And they peek out from everywhere.

Multicolored or monochromatic, they fill the streets with myriads of shiny shades. They run through Lisbon like a silver lining, waking up the soul of this Atlantic windy city.

What's your opinion on this? Cancel reply

My biweekly newsletter, called The Postcard, will reach you on Sundays.

You'll get the latest inspiration on travel experiences, life lessons from the road and travel industry news.

Take my word for it